If you are a speaker of Hindi, Urdu, Punjabi or most other Indian languages who can read Hindi and English, the following will help you to learn French alphabet through Hindi in no time. Want to listen to the pronunciation along with explanation in Hindi? Then watch our YouTube video on the same lesson. 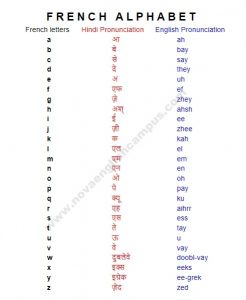 In French alphabet, you might have noticed that some letters are pronounced almost the same as they are in English alphabet? Which are those letters? F, L, M, N, O, Q and S. A great relief, uh? But please be careful. These letters are pronounced ‘almost’ the same way as they are in English, not exactly the same way. You need to listen to them again and again and observe how slightly different these letters’ pronunciation is. And needless to say, the remaining 19 letters are pronounced in an entirely different way. Some Hindi speakers may find them a bit different and confusing. But remember when a French speaker tries to learn Hindi, they also might have to feel a lot of such difficulties at the beginning. All I want to say is that the new sounds may confuse you a little at first but keep practicing. You can do it!

For more information about our various French courses (both online and offline),
visit www.novaenglishcampus.com